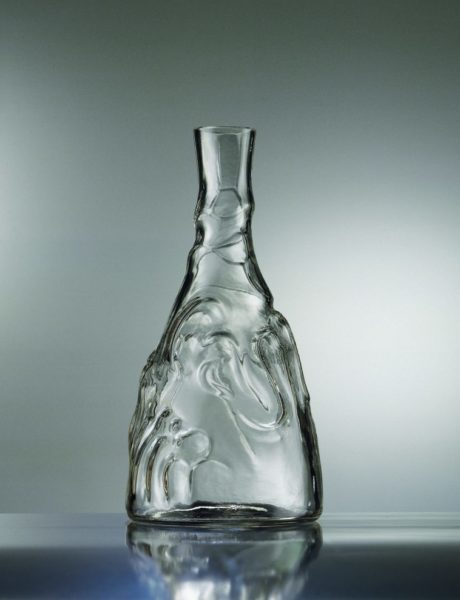 The Casa de Familia water decanter, designed in 1912 for the orphanage of the same name, is a simple and humble piece that magnificently demonstrates all the artistic ability of Josep Maria Jujol.

Josep Maria Jujol (1879/1949) is one of the greatest, yet least known, geniuses of Catalan architecture whose imagination and creativity are astonishing in each and every artistic discipline he embraced. He was an architect, a painter, a sculptor and a graphic artist to name only some of his talents, and he was Gaudí’s closest and keenest collaborator.

After the time he spent with his maestro he experimented with all styles until he had established his own creative universe that was far removed from the conventionalism of his day.

The bottle has an approximate capacity of 1,2L.

There are no reviews yet.

The two-tone metal ribbon of the Intuition dining table evokes the mysterious and divine feminine instinct. Carefree & unexpected swirls are guided by emotions and desires. Matt black metal swirl with metallic gold powder paint interior and smoked glass top give this table the most unique character and charm.

The OCCO Chair in fabric has all the style without sacrificing comfort. The original combination of materials emphasizes the simple but interesting bucket shape.

The simply stylish VOOVOO two person sofa, has understated modern lines and a sturdy construction. It is the perfect addition to a reception or communal area, and is available in a wide range of colours and fabrics to suit your interior.